Get in touch
Our services

Don Griffiths came to the Waikato from the South Island in 1959 and, after working at Tirau Earthmovers, decided to buy his own D47u bulldozer and “have a go”.

Hard work and long hours swamp clearing, contouring, race building and most other things, he began paving the future of Don Griffiths Limited.

With the future in mind, he had a drain cleaner made to his specifications and bolted it onto the D4.

This was the beginning of many innovative ideas that helped establish Don Griffiths Ltd, formed in 1972.

It was in 1981 that Don, with son Kevin, introduced laser technology to enable controlled grading for accuracy in fall. This enabled trenching to work faster and much cleaner.

The next purchase was a vibratory plough which enabled the company to negotiate a deal with the Post Office (now Spark) to lay cabling. In the mid-80s Don Griffiths Ltd took off in two directions: the drainage operation expanding into the Waikato and the introduction of fibre optic cabling paving a new path thanks to Don Griffiths Ltd’s mole ploughing machinery and expertise. The company has since laid more than 20 million metres of cable using this method.

Throughout the years Don’s sons, Kevin, Alan and Michael have been in the business, bringing their engineering, draughting and computer skills with them.

Today Kevin and his wife Sandra own the business.

We are a highly experienced team boasting extensive knowledge of all aspects of drainage, irrigation, drilling , ploughing, thrusting and rock sawing. 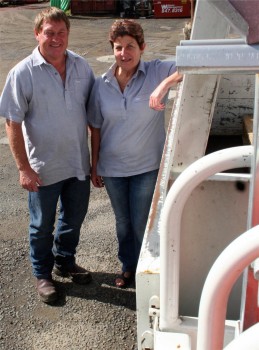 Kev’s many years of engineering, surveying and drilling experience is of great benefit to our customers, working closely with them to determine precise parameters of the project, the required timeline and budget.

Then he makes sure we provide exactly what we promise.

A dedicated, shareholder with a heart of gold, Sandra keeps the lads in order.

Get started with your project today